I decided to take a trip to the Azores archipelago in the North Atlantic Ocean after reading about volcanoes in one of Winston’s numerous back copies of Mouse Geographic magazine.

Legend speaks of an ancient tribe of mice living on these volcanic islands but alas there have been no confirmed sightings to date. After reading the somewhat lengthy article, I had an idea that perhaps previous miceropologists had been looking in the wrong place. 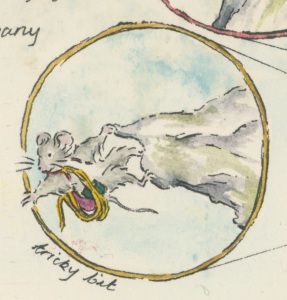 After a lengthy climb and two rounds of cheese and pickle sandwiches I chanced upon a small doorway hidden within the rocky escarpment. What awaited me was a dark and gloomy staircase leading to a myriad of underground rooms and passages.   Finding not one solitary mouse, I can only assume that the tribe had popped out for a spot of lunch, and on leaving a note to say I’d popped by, continued down the staircase.

Just as I was nearing the bottom, an ear-deafening roar sent my trusty torch flying out of my paw, which after shooting several foot in the air then performed several bounces down the remaining steps before shattering into a number of untrustworthy pieces at the bottom of a large chamber. Plunged into darkness, I had no option but to feel my way around until a dim light shone faintly from an enormous eye in the wall.  Now, I’ve often heard it said that ‘walls have ears’ but walls having eyes was a new one on me!

To cut a long story short I spent the afternoon in the company of a delightful sea dragon. Over some toasted crumpets and a goblet of duckweed cordial, I discovered that Nessie quite often summers in Scotland. We promised to meet up when we are both in the highlands again.

Sadly I won’t be able to write to Mouse Geographic with any significant information on the lost mouse tribe but I may drop them a few lines about the true nature of volcanic activity.

Morris would like to dedicate this blog to the Hunstanton and Skegness sperm whales who sadly beached and lost their lives on the 22nd and 23rd of January 2016, a sad day for British waters.

This site uses Akismet to reduce spam. Learn how your comment data is processed.